How to Identify Green Sea Turtles

If you've ever been scuba diving you might get excited over seeing a turtle. The better you get, the more turtles you see and eventually you start to identify a Green Sea Turtle, a  Loggerhead, or a Hawksbill turtle.  If you're really lucky, you might encounter a Kemps-Ridley or maybe even a Leatherback. 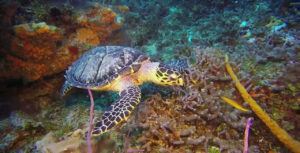 Loggerhead and Green turtles are similar, but here are some differences you might be able to quickly see as you glide past a sea turtle on your dive:

These three things will help you decipher which turtle you encounter.

Though you might encounter many turtles on your dive in a particular area, you should know that sea turtles are actually endangered.  Many programs are in place to help protect sea turtles, and in fact - divers are a catalyst to help.

These sea turtles are endangered:

Next time you dive with a sea turtle, remember - you are encountering an endangered species!  And, you have an opportunity to advocate for them -  now, go diving!