The learning curve for camera equipment can be sharp once you start using that equipment underwater.  The environment has many factors from depth and light, white balance and red filters, and today's subject: Focus.

I'll Just Let the Camera Do Everything

With something simple like a GoPro, this is a great attitude, provided you have the proper red filter for the depth and conditions you are diving.  However, if you've decided to take the plunge in a more elaborate camera, the "auto settings" will usually result in disappointment. 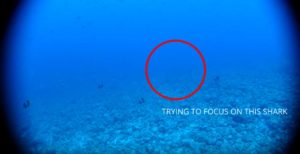 Nothing hurts more than losing files on your memory chip, except compromising footage with auto focus and losing a 9 foot Bull Shark to auto focus.  9 feet of glorious shark lost to a wonderful closeup of plankton.  Ouch.  Auto focus is great for moving subjects on land, but underwater, no water is clear enough for your camera to reasonably focus on a target that isn't relatively close to you.  In the video, you can see the camera lose the shark, then lose focus altogether.  If you listen close, you can also hear the sound of the camera inside the housing talking up a storm over losing focus. 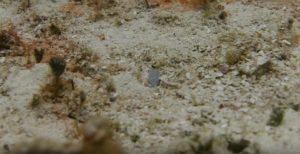 In this video clip of a Yellowhead Jawfish, I set the focus on the hole where the fish had disappeared into.  I hoped if I waited long enough and calm enough, he would come back out of his hole and make a wonderful video.  Nice try... but, I should have moved back a bit to put him in focus, instead of the substrate and sand behind him.

Takeaway: Focus on your subject, start shooting, keep the same distance between you and the subject.  Pre-requisite - get your buoyancy perfect, learn to feel the current, stay calm. 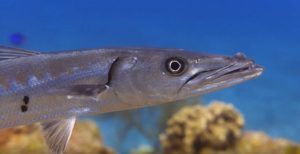 The clip from the video of the Barracuda shows a focus on the fish as he swam gently against the current.  All was well until the current shifted slightly and his angle to me changed.  I was able to adjust enough to keep part of the fish in focus, but not necessarily the same part that I had started with.  The result was acceptable, just not intended.  Sometimes the beauty of our expectations are surpassed by what nature hands us. In this case, a beautiful scale shot of a barracuda.

Takeaway: Watch yourself and your surroundings as you shoot.  Fish can feel you pressure bubble and everything underwater feels closer than it really is.  Keep shooting even if it isn't perfect, you might be pleasantly surprised. 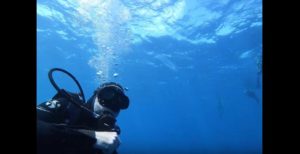 The next clip in the video shows not only a scuba diver in the foreground, but a floating jellyfish slightly further from him, and some scuba divers on the surface more than 15' away. In this scenario, the only way to capture all of these things in reasonable focus is with a wide angle lens.  The fixed focus had a huge amount of leeway in this video, allowing 3 different subjects at 3 different depths and 3 different rates of movement to all be relatively in focus. 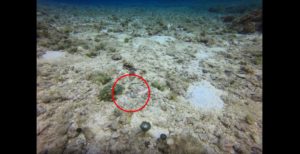 Once again we visit the Yellowhead Jawfish at his home for a quick time lapse view. In this case, I set the camera down near the hole and set my camera to time lapse.  I swam away to allow the fish to be distracted by me, rather than the camera.  He watched from a safe distance, meanwhile my camera captured his actions.  Time lapse is fun. The general light sensitivity of each frame changes with every rolling cloud, giving the video a really different feel.

Takeaway: Have fun, be creative and keep shooting.

You can find out more about which cookies we are using or switch them off in settings.

This website uses cookies so that we can provide you with the best user experience possible. Cookie information is stored in your browser and performs functions such as recognising you when you return to our website and helping our team to understand which sections of the website you find most interesting and useful.

Strictly Necessary Cookie should be enabled at all times so that we can save your preferences for cookie settings.

If you disable this cookie, we will not be able to save your preferences. This means that every time you visit this website you will need to enable or disable cookies again.