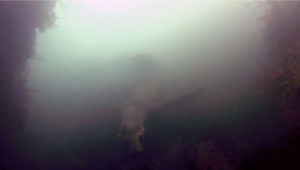 April in Monterey Bay is beautiful - high 50's with sun and scuba diver energy around.  The parking lot near San Carlos Beach is filled with nothing but scuba divers and tag-along ocean enthusiasts.  Scuba tanks lay behind cars as divers don gear or strip off layers as they pass through various stages of the dive day.  Instructors and their Open Water student divers fight past the breakers, while other divers grab a snack during their surface intervals. It is fantastic to see friends hanging out together sharing a common love the ocean.

It truly is a diver's paradise.

Past the parking lot and near the water's edge lies a commune of sea lions basking in the sun. They bark as divers swim past them on the surface.  Some more curious animals dive in and out of the water for a look beneath the surface in the kelp forest below.  The barking is surprisingly loud, both above and below the surface.

The sea lions seem mostly curious as they dart past divers for a quick glimpse.  Some linger silently as they stare, floating seemingly weightless in the water.  The silhouette of the animals is quite pronounced as they swim in the glistening light from above.  Some of the more curious sea lions come in rather close, bark loudly and swim off.  Perhaps the behavior is a sign of dominance, or an invitation to play.  Either way, the experience is remarkable and one to note in the dive log as a great day.