JS5 Awakening as a Citizen Scientist 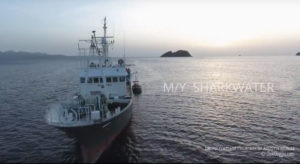 I began this journey, captivated by the unknown.

A once in a lifetime opportunity.

Over 20 years ago, I was a nervous open water scuba student following a yellow rope into a murky abyss of the local reservoir. I managed to pass and attain my first of many future SCUBA certifications.

Today, I sit onboard a research vessel as a student of the sea. I am a citizen scientist on the first shark tagging and turtle research expedition open to citizens since 2006, the Jurassic Shark 5 Exercise. I am joined by the company of regarded scientists, experienced military veterans, ocean enthusiasts and a professional, seasonsed crew. We are on board M/Y Sharkwater, a vessel named after filmmaker, shark conservationist  Rob Stewart.

Formerly a Japanese fishing vessel, Sharkwater has now been refitted as research vessel by Fins Attached Marine Research and Conservation. The research scientist and citizen scientists programs are designed to pair scientific research with civilian assistance, field work with knowledge and experience with conservation education.

The mission of Jurassic Shark 5 is to assist scientists and researchers along the pacific coast of Costa Rica. The scientist's ultimate goal is to better understand and document the ecosystem that exists among sharks, turtles, jaguars and other endangered species. Their research, combined with others' will allow a greater understanding and protection of these species as well as their habitats. These ecosystems span from the coast of Columbia to California, as well as the far reaches of world.

The ecosystems and their understanding are critical to life on this planet we call earth.